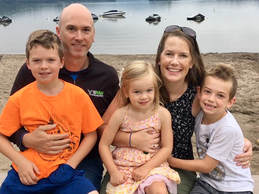 Mr. Woolley started learning percussion at age 9 with a Mike Rugello while in the Amesbury school bands under Al McDonald.  During High School and College he studied percussion under Gary Spellicey.  He delivered the Boston Globe to afford lessons, in high school began teaching private drums lessons, and worked a few summers in a show band and chorus at a resort in NY, then at Cabot Stains Factory in Newburyport MA to cut down on the expense of Gordon College where he received his Bachelors in Music Education K-12.  During college he continued to give private lessons and worked as a part time swim coach for Beverly High School, North Shore Swim Club, and Ipswich Country Club where he also life guarded and gave private and group swim lessons.
After finishing student teaching at Triton Regional Jr. and Sn. High School and graduating in Dec. of 2001 he worked a number of part time music jobs at Salem Christian Academy, Stratham Elementary, Boxford Academy, and private lessons. Then in August of 2003 he started his first full time position as music teacher at Seabrook Middle School.  The schools program had no formal music curriculum and band and chorus rehearsed once a week after school and had a total of 8 kids in either program. After a few years, through hard work and support from administration, PTO, and school board, rehearsals for band and chorus met during the school day and general music had a curriculum utilizing keyboards, guitar, drums, bass guitars, and sound equipment.  After a few more years the music room moved into a larger space due to increasing numbers of band and chorus members. With continued support of our FOM Friends of Music volunteer parent/boosters group, community, PTO, school board, and administration we now have a midi lab and enough room to rehearse our combined grades of band and chorus.. We also have specifically designed posture chairs, enough music stands, and staging for more effective rehearsals and classes and better behavior management.  We also have instrument lockers, a smartboard, recording abilities, a podcast, streamed live performances of concerts which are now performed at the Winnicunnet High School auditorium. As of late (2013) the band won gold and chorus won silver, in its 6th year of attending the Great East Festival!  Over the course of 8 years, during this fast paced growth of the program, he won Walmart Teacher of the Year in 2007, completed his Masters of Education in Administration K-12 from Plymouth State University, become TI:ME (Technology Institute of Music Educators) certified, serves on administrative council, plays drums for the Byfield Parish Church praise band, got married in 2007, had his first child in 2009 and a second in 2011, begun a Literacy K-12 certificate of advanced graduate studies at the University of New England, and continues a passion for learning how to utilize technology in the classroom, be a more effective teacher, and be a consistent positive role model.